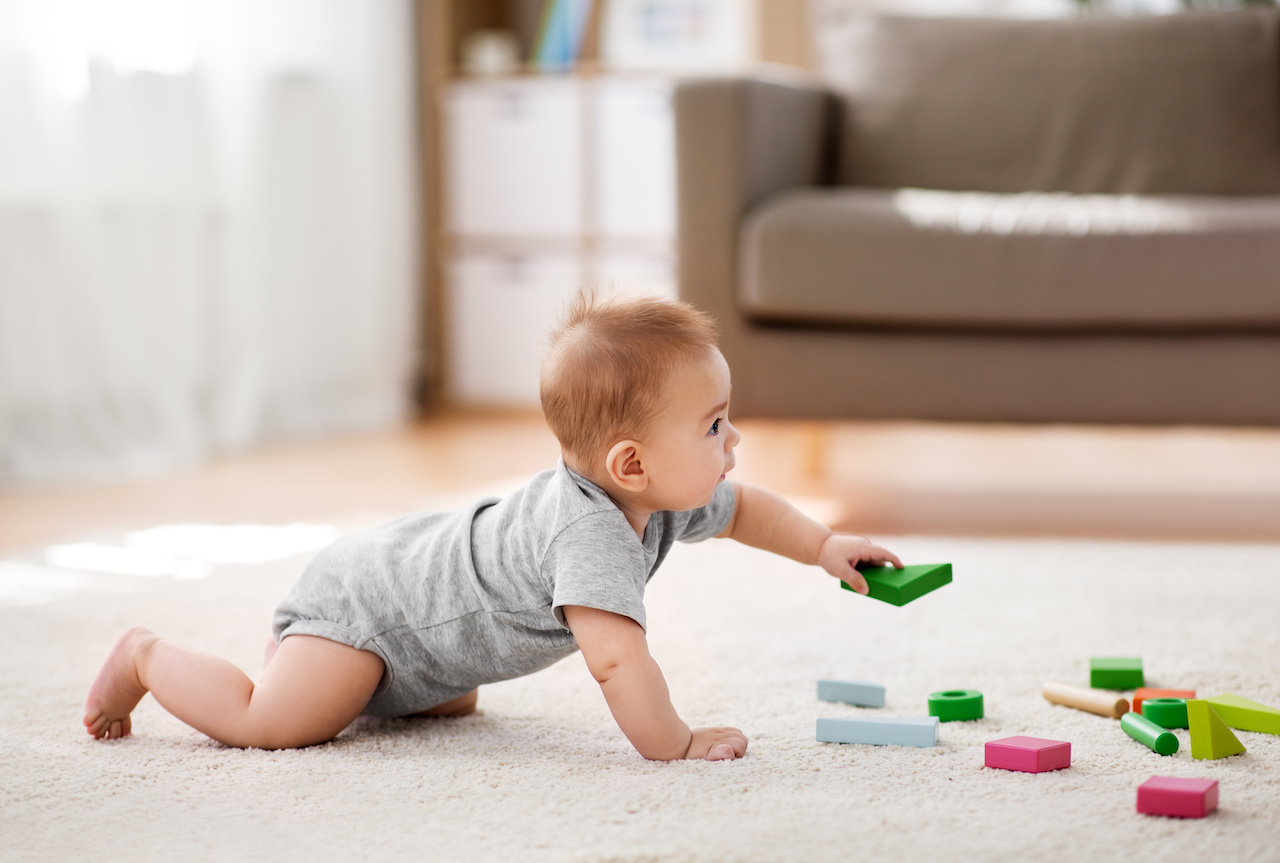 As a mother myself, as well as a sleep consultant whose nine to five job consists of meeting with the parents of babies and toddlers, I’ve come to the inescapable conclusion that babies, as a rule, are complicated creatures.

I’ve always gotten a giggle from Matthew McConaughey’s quote about newborns, saying, “They eat, they crap, they sleep, and if they’re crying they need to do one of the three and they’re having trouble doing it. Real simple.” And in a way, he’s right. A baby’s vital needs essentially break down into eating, sleeping, and pooping, and their only real form of communicating an issue with any of those things is through crying.

But as any parent knows, identifying the fact that there is a problem is far, far easier than solving the problem, and as parents, that’s what we want to do. (And I use the word “want” there in the same way I say that we “want” to, you know, breathe air and drink water.)

Now, if you’re the parent of a baby who’s learning to crawl, or who’s teething, or just figured out how to roll over, this may come as the least surprising scientific discovery imaginable, but developmental milestones are likely to cause disruptions in a baby’s sleep.

In a 2015 study published in Monographs of the Society for Research in Child Development, researchers looked at the sleep patterns of before they started crawling, while they were learning
to crawl, and a few months after learning to crawl. The results stated that, “Along with the overall improvement in sleep consolidation, periods of increased long wake episodes were also manifested; the rise in sleep disruption was temporally linked to crawling onset. The results of the study highlight the dynamic interrelations between
domains of development, indicate that emerging motor skills may involve periods of disrupted sleep, and point to the moderating effect of age.”

To dumb that down significantly, babies appear to have more nighttime wake-ups around the time that they learn to crawl. (Nighttime wake-ups were monitored by
a motion sensor on baby’s ankle and were only counted if baby was moving around for more than five minutes.)

To quote that same study, “In dynamic systems, downward trends in performance and in behavioral control often mark the emergence of new abilities. This pattern has been identified in diverse domains of infant development including manual reaching, vocal production, and language acquisition.”

Or, in layman’s terms, things tend to get worse before they get better, and when your little one starts learning to talk, you can expect some random blathering sessions in the middle of the night.”

Teething is another one of the usual suspects when it comes to disruptions in baby’s sleep, and again, it seems like common sense. If baby’s got sore gums, that discomfort is probably going to make it a little tougher to get to sleep and stay asleep. But do we really know any such thing for sure?

A study from the April, 2000 issue of Pediatrics looked at symptoms that could and could not be attributed to emerging teeth. It found that during the 4 days before a tooth emerged, the day it popped out, and for the three days following, there was a statistical increase in wakefulness and irritability.

The discomfort that comes along with teething explains why it would be disruptive to your child’s sleep, but leaving that one aside for a minute, let’s look at language and movement skills and why they might be responsible for some more frequent nighttime wake- ups.

Much like the rest of us, babies get excited when they start to learn a new skill. Watching my little one learn to crawl reminded me of myself when I first used Shazam to identify a song playing over the speakers in Starbucks. I was ridiculously, I mean ridiculously excited. I couldn’t wait for another song to come on so I could try it again, I started singing obscure ‘80s pop songs to see if it could nail them down, and I showed it off to literally everyone who would listen.

To your baby, learning to roll over, learning to crawl, or learning to talk, elicits pretty much the same response. They get a real thrill out of this newfound ability and they are going to practice it over and over. In the morning, in the afternoon, and when they wake up in the middle of the night, and that excitement is going to make it a little more difficult for them to get back to sleep.

The reason I wanted to talk about this is because I see a lot of parents looking for a “solution” in this scenario, and in trying to get their baby’s sleep back on track, they tend to lose consistency. They’ll move bedtimes around, start rocking or feeding baby back to sleep, change up the bedtime routine, anything they think might help. But the best advice I can give you is to hold steady.

You’re probably going to have to go in and soothe your baby a little more often during this period, and you’ll have to help get them out of the uncomfortable positions they manage to get themselves into, and you’ll likely have some frustrating nights where your little one will drive you a little batty with their babbling.

And although you can’t fix the situation, you can make things substantially harder for both you and your baby. Adopting a bunch of quick-fixes in order to get your baby sleeping quickly when they wake up at night is very likely to end up creating dependencies that will last long past the time baby’s figured out how to get themselves readjusted when they wake up in the night. So don’t give in to the temptation to rock or bounce them to sleep, don’t let them sleep in the swing, don’t take them for car rides, and above all, don’t nurse or feed them back to sleep.

Offer them some comfort, tell them it’s still bedtime, help them get back into a comfortable position if they’ve gotten themselves pushed up against the side of the crib, or roll them onto their backs if they’ve flipped, but make sure to let them get back to sleep on their own. That way, once they’ve got this new skill mastered, they’ll still have the ability to self- soothe when they wake up at night.

It’s likely to be a bit of a challenge, and it may feel at times like one skill gets mastered just in time for another one to start developing, but hang in

there. The whole time this is going on, your baby is also developing the ability to better consolidate nighttime sleep, so stay consistent and you can expect even more of those glorious sleep-filled nights once the storm has passed.